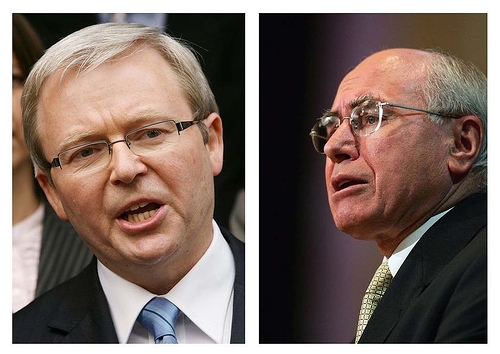 I would like to congratulate Australia on finally ridding itself of John Howard. In 2002 I wrote about ““Howard’s openly racist policies” and more recently we’ve had some excellent discussion on Savage Minds about his use of the “Little Children are Sacred” report to undo decades of progress on Aborigine autonomy. I’d really begun to give up on Australians, so I’m glad to see that they finally had enough, even if it was his economic policies rather than his racism which led to Howard’s defeat.

What caught my attention in the Guardian article was an offhand mention of Kevin Rudd (Howard’s replacement) as being proficient in Mandarin. Wikipedia confirms this:

Rudd studied at the Australian National University in Canberra, residing at Burgmann College, and graduated with First Class Honours in Arts (Asian Studies). He majored in Chinese language and Chinese history, and is proficient in Mandarin. Rudd gave himself a Chinese name (Traditional Chinese: 陸克文; Simplified Chinese: 陆克文; pinyin: Lù Kèwén;) when he was studying in university.

I can’t think of too many heads of state whose mother tongue isn’t a Chinese language who speak Mandarin fluently. In fact, I can’t think of any. I’d be curious to know of any other examples if they exist.

UPDATE: David Reid found this interview with Rudd, which he interprets as a bad sign for Taiwan. I disagree. You have to understand that Rudd is speaking as a government spokesperson who is very careful to toe the official line, given that I think he displays a tremendous amount of sensitivity and knowledge regarding the situation in Taiwan. After making the obligatory nod to the official Beijing view he does something I’ve not seen any mainstream newspaper or politician do, which is to contextualize the DPP’s pro-independence stance in terms of the history of Taiwan’s democracy movement and opposition to the KMT.

Well, to take my previous point just one step further, part of the challenge in Taiwan has been by the sheer vibrancy of the Taiwanese democracy which has emerged in the 1990’s. It’s a very vibrant democracy. In many respects, the government in Beijing preferred the status quo anti. That is, the previous KMT government of Taiwan which still adhered to the theory of the one China policy. In other words, there was one China, Taiwan was a province of China, and, the only difference was whether the legitimate government of China was the KMT government, led by Chiang Kai-Shek and his successors, or whether it was the communist government led by Mao Tse Tung and his successors. When I studied in Taiwan as a student, the, the fiction maintained then, this was in the late 70’s, early 80’s was that the capital of China still was Nanking. Because, when Chiang Kai-Shek fled across the Taiwan straits in 49 at the end of the Chinese civil war, the formal capital of Republican China was Nanking and they still referred to the Nanking government. Now, all that historical fiction if you like has been rolled away. And now, with the functioning Taiwanese democracy we have Chen Shui-bian opposition party, The Democratic Progress Party now on two occasions successful at the presidential level, which is what we now confront. And I’m sorry for saying all of that, but, in answer to your question, but it does, contextualise the challenge which the international community has in dealing with the Taiwanese government which is democratically elected.

Sure, Australia is bound by treaty to recognize Taiwan as part of the PRC, and he has to say that — but here is a guy who really understands Taiwan and I have to say I’m quite impressed. Try and get a response like this from any other world-leader …

He also discusses why he became interested in learning Chinese:

I grew up in the Queensland country my existential conversation as a kid way, I grew up on a farm and my father said to me when I was about 10 — “Kev have you made up your mind what you are going to do in life?”. Which to a 10-year old is a fairly confronting question.

We had a book on Chinese archaeology and I would squirrel myself away under a tree and have a read while I supposed be getting the cows. I think that’s how it all started. And I was inspired as a kid by Gough. And I thought this country is going to have a huge impact on us somehow some way so I should try and learn the language which is what I did.