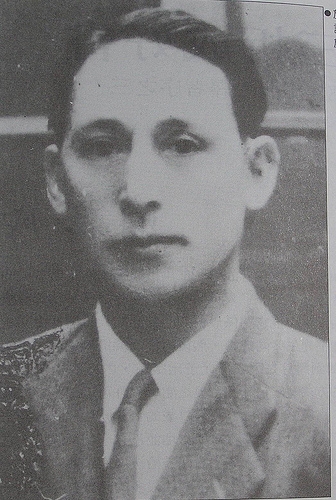 The other day I went to see an interesting performance built up around the life and work of Gao Yi-sheng 高一生. Who is Gao Yi-Sheng? There isn’t much about him in English on the web, but here is a short blurb from the Taipei Times:

Better known by his Chinese name of Kao Yi-sheng (), Uyongu Yatauyungana was the mayor of the Tsou Aboriginal township of Wufeng () — since retitled Alishan Township () — in Chiayi County.

Yatauyungana was born in 1908 when Taiwan was under Japanese rule.

Although it was difficult for native Taiwanese students to receive a higher education under the Japanese system, he was able to attend the Tainan Normal College through his connections to the Japanese authorities.

He later returned to the Tsou people’s mountain communities, bringing with him new ideas and processes that assisted in modernizing the Aboriginal communities there.

During this time, he also composed many pieces of music and accompanying lyrics.

After World War II, Yatauyungana began promoting the idea of Aboriginal autonomy. When the 228 Incident erupted in 1947, however, he coordinated a group of Tsou tribesmen who joined Chiayi locals in fighting against Chinese Nationalist Party (KMT) forces, eventually trapping them inside Chiayi’s airport.

Because of his ideas and actions, he was jailed by the KMT government and executed in 1954.

Gao was a prolific writer of poems, letters, and songs, which have been published in book and CD form. The performance, which included many students from our college, mixed traditional Tsou 鄒 songs with Japanese era melodies, and songs written by Gao or adapted from his letters, as well as some Western pieces which his daughter had performed when she worked as a night club singer for US soldiers in Taipei. Many of the performers were Aborigines from other parts of Taiwan who had to learn Tsou and Japanese for the show. They did a great job! Still, while the songs and dances were great, the storytelling was unrelentingly melodramatic in that particularly Taiwanese fashion. They could do with a healthy dose of sarcasm and irony …

I also worry about the overly nostalgic representation of the Japanese era. While it is true that many of the Aborigine elite did well under the Japanese, there were tens of thousands more who were killed and displaced in genocidal military campaigns. (We only have the records of the number of Japanese soldiers killed, which were in the tens of thousands. Presumably many times as many Aborigines died, and many still suffer as a result of being displaced from their land.) Still, it is a fascinating piece of Taiwanese history and we really enjoyed the show.

You can see a different performance of some of Gao’s songs, done by Tsou singers, on Google Video: here and here. There is also a three part documentary on Youtube (in Chinese): here, here, and here. Some more songs here. And this beautiful gif-animation (unfortunately the sound is not very clear, but it has subtitles).