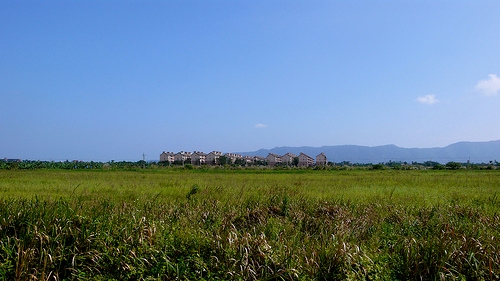 Red A recently had a post which seems to imply that Taiwan’s own hosing bubble is about to burst, with housing prices way above their actual value. I haven’t shopped for a place here on the East Coast, but I know that things are a lot cheaper and that there is rampant housing speculation.

Looking at the above picture you can see that our home is in a pretty strange development. It is an urban-style housing complex in the middle of farmland, made with the same ugly pink tile you find everywhere in Taiwan. We are lucky to be on the side of the complex facing the organic farm so we have a nice view of the mountains. But I’m pretty sure that if they build the new highway, it won’t be long before we’d be looking at ugly pink tile buildings out of our window.

Now its likely that this will happen sooner or later, with or without the new highway. That’s why I think it is better to have a safer road than to block development of the road altogether (although nobody trusts the official environmental impact statements for the road construction). In an ideal world local environmentalists would simply demand offsets and new zoning regulation to compensate for the increased traffic, but the problem is that zoning laws are never enforced in Taiwan, and any offsets would be eaten up by bureaucrats before they were spent on anything useful for the environment. So there is no choice but to protest the highway instead.

I think the laissez-faire attitude of the Taiwanese state is responsible for some of the best and the worst things about this island. On the one hand there is a vibrancy to the economy and the urban landscape which is unparalleled anywhere in the world, but, on the other hand, everyone pays for the weakness of Taiwan’s regulatory regime, especially with regard to labor laws and the environment. Unfortunately, when the government does seem inclined to increase regulation its targets are mostly symbolic: food carts, English teachers, etc. While in the United States I believe there are real differences between the political parties in terms of how much they are willing to regulate big business in ways that make an impact on income inequality and the environment, I don’t see much of a sign that either of Taiwan’s political parties would make a difference in this regard.

I’m unable to go out today to demonstrate my support for Taiwan’s Green Party, who have organized a march downtown today, but I’m glad to see that there is a real “green” party in Taiwan (not to be confused with the “green alliance”).