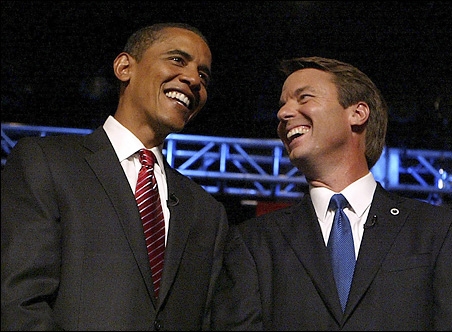 For those who haven’t been following, Obama’s been doing his best to alienate the progressive left. That’s resulted in him butting heads with two of my favorite people: John Edwards and Paul Krugman. And while it may result in more corporate fundraising for Obama, he’s come out looking much worse for the wear.

Obama has framed himself as a candidate who will transcend partisan politics as well as someone who isn’t afraid to tell tough truths to voters. Those sound good in theory, but in practice it seems to result in Obama rehashing right-wing talking points when criticizing his collegues. He did it over social security, he did it comparing his health care plan to those of his opponents, and now he’s doing it over how he would go about implementing health care reform.

Want a candidate who will stand up for progressive values? Support Edwards!

UPDATE: Excellent (Krugman-approved) summary of the issues by Lambert.