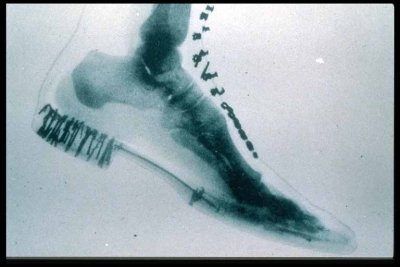 In 2000 Shashwati and I travelled to Iceland for our honeymoon. We had a fantastic trip, but the flight back was very early in the morning on the last day, and we were still pretty groggy when we got to customs. Actually, we were the very first travelers to arrive at customs, which was otherwise empty that morning.

There were only two x-ray machines there, with two young Icelandic security officials working them. We were directed to the first machine and promptly began unloading our baggage — which was bursting to the brim with all the gifts we had bought. I proceeded through the metal detector without a beep, but when I got to the other side the guard exclaimed something to his colleague who came rushing over. They talked a bit in Icelandic, and then came over to me, looking very serious. My bag still hadn’t come out of the machine.

This is what ensued:

Security: Excuse me. This is very strange. Do you have anything unusual in your bag?

Me (Still groggy and shaking my head): No. Why?

Security: I’ve never seen anything like it. Did you pack your own bags this morning?

Security: Perhaps you should come and take a look.

Then they showed me the X-ray screen which showed a foot in a boot, inside a bag.

Now, at this point I should have suspected a practical joke. We were the first people in the morning and they had clearly put their own foot in the machine and taken a picture before we came. But I had been so conditioned NEVER TO JOKE at customs or in an Airport that they very possibility never crossed my mind. I don’t know what I thought. I just ripped open my bag to show them that there was no severed human foot in there. They looked, said “OK” and waived me on. Shashwati and I didn’t fully register what had happened until we sat down and ate our breakfast, at which point we laughed at how different Iceland was from anywhere else we had been.

Somehow I don’t think that is the reaction that Erla Osk Arnardottir Lillendahl had when she was locked up and put in shackles for two days at JFK without being allowed to contact her family. (More here.) Not very funny… even by Icelandic standards.