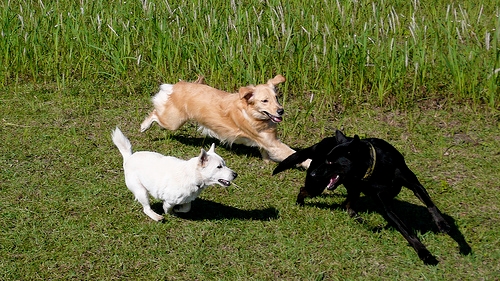 I don’t have too many good pictures of Big Ears (the black dog) because when she was around the dogs were usually moving too fast for me to capture on film. Either they were running, or they were wrestling and all I photographed was a big ball of fur with black and brown paws sticking out.

Big Ears was Juno’s best friend. Now she’s dead. The community placed a dog trap in our housing complex and Big Ears went into it. The rules say all dogs in the community must be kept on a leash and any dog that goes in the trap gets taken away.

We first noticed Big Ears about a year ago. At the end of the semester some students must have left her behind when they moved away. A lot of dogs end up stray that way, but this dog was so sweet tempered that she was adopted by our neighbor who fed her and took care of her. Along with Happy (the white dog) and Spot (not pictured) these three abandoned dogs are cared for by our neighbor. She doesn’t exactly “own” them, but she makes sure they are fed, and if something happens she’ll take them to the vet. Otherwise they live like street dogs.

At first we were nervous about letting Juno associate with such riff-raff, but over time we discovered that they played very nicely together. When we took Juno out for a walk they would follow us to the field. Dogs need other dogs to play with and only Big Ears could really tire Juno out. Playing fetch with me just isn’t the same. Nor could Happy or Spot keep up with Juno. Big Ears was a perfect match. We’ll miss her … 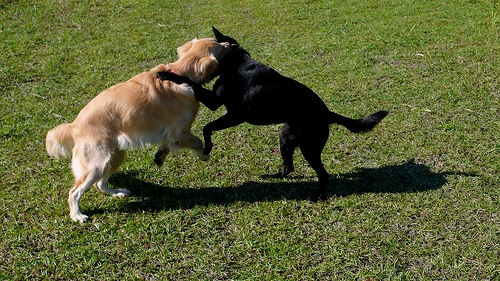 UPDATE: Turns out I was lied to. Or perhaps the guard I spoke to didn’t know the full story. But I was assured by the woman who previously cared for Big Ears that she was adopted by a student. She said they told people she was put to sleep because neighbors were complaining about the dog. I don’t really see how this makes any sense, but if its true I’m glad to know she’s OK.