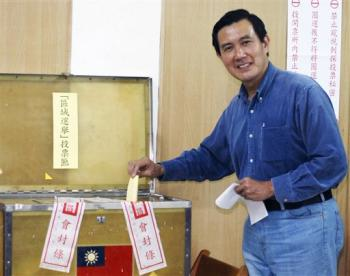 Almost every single American newspaper ran stories about the Taiwanese election attributing the DPP’s defeat to “broad disenchantment among Taiwan’s 23 million inhabitants over the combative pro-independence campaign that has been the centerpiece of Chen’s two four-year terms as president.” I don’t know what motivated the average Taiwanese voter to support the KMT’s sweeping victory, but as best as I can tell, a major reason for the victory was the DPP’s lack of an effective strategy in the face of sweeping changes to the electoral system.

Shelley Rigger summarized the changes in the Wall Street Journal before the election:

The reform cuts the size of the legislature in half, to 113 seats from 225, and replaces the island’s 29 cumbersome multimember districts with a two-track system. This system combines representatives from 73 single-member districts (representing about 300,000 people each) and 34 seats chosen by a party-list system; each voter will tick both a candidate for his district and a party preference. Six seats are set aside for the island’s small indigenous population.

Rigger already anticipated that these changes would favor the KMT, “as the single-member plurality rules have driven third-party and independent candidates out of the race” and because “the KMT is the plurality choice in most electoral districts.” Indeed, that seems to be what happened:

“The [single-district, two-vote] system is really hurting the DPP,” Jim Lee (李筱峰), a political commentator and professor at National Taipei University of Education’s Graduate School of Taiwan Culture, said in a telephone interview.

“The KMT has built up a very strong local network and it’s therefore easier for it to use that network and grab votes in the new districts,” Lee said.

“If we look at past elections, we can see that KMT candidates usually ranked No. 1 and DPP candidates ranked No. 2 in districts where multiple seats were elected,” he said.

“Now, as only one candidate is elected, some of the former No. 2 DPP candidates will just be dropped,” Lee said.

Given that such results could have been, and indeed were anticipated, the DPP should have acted accordingly by seeking to build up the grass roots support needed by an opposition party. Instead they seem to have acted more like the ruling party they never were. Although Michael Turton shows that the DPP “actually raised its vote total by 140,000 votes over 2004,” it seems that low voter turnout, especially among young people, hurt them where it counts. Although the article doesn’t actually provide hard numbers to support this conclusion, I don’t think there is any doubt that Taiwanese voters are disenchanted with the political process in general and the DPP in particular.

Apart from corruption scandals, which are certainly a big part of the story, the DPP lacks a vision for Taiwan. As I’ve written here numerous times, besides identity politics, the DPP have done nothing to truly distinguish themselves from the KMT. Part of this is because for the past eight years the KMT dominated legislature has blocked most of the DPP sponsored legislation. But it is also because somewhere along the line the DPP stopped being the party of social justice, the environment, etc. All the things that they stood for in the 90s. Although artists, academics and intellectuals are a small part of the electorate, I know that many of my friends and colleagues used to be ardent DPP supporters, but voted for the Green Party this time around. Unfortunately, third parties suffered even worse in this election, which is likely to ensure the DPP’s place as number two in a two party system.

UPDATE: The voter turnout was “less than 57 percent — the lowest for legislative elections since 1972″ according to the Taipei Times.