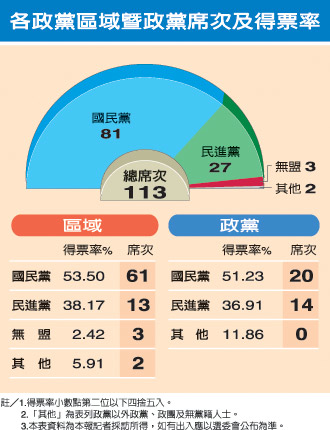 Schee posted a link to this article on the new voting system which so affected the Taiwanese legislative elections. (See my last post on this.)

Several countries now mix proportional representation with voting for individual candidates, as Taiwan now does. However, it turns out there are two different models for how the mixing works: the one-vote model Additional Member System (AMS) [UPDATE: See comments below for further clarification.] used in Germany, and the parallel model used in Japan. Not unsurprisingly, considering their close historical relationship, Taiwan has copied the Japanese system. Here is some background on the differences, courtesy of a 2004 BA thesis [link to PDF download] by Joe Michael Sasanuma:

In most countries that have adopted the mixed system, like Germany, the single member district tier affects the distribution of the seats among the parties in only the most unusual circumstances; the SMDs are designed mainly to give voters a specific representative that they can identify as their own. The Japanese system is called “parallel” because, unlike the German system, there is almost no connection between the single member district tier and the PR tier in how the seats are distributed; the party’s sum is determined by the number of seats it wins in the SMDs plus the number of seats won in the PR. Voters are given two votes, one for the SMDs to vote for their preferred candidate, and the other for the PR tier to vote for their preferred party. The candidates on the PR tier are elected based on the number of PR votes—not SMD votes—that the party receives. Indeed, it is quite a bit of irony that when it was normal to give voters multiple votes, as in a multimember district, Japan only gave one, and now when it is normal only to give one vote, as in the mixed system, Japan gives voters two.

Taiwanese blogger Ivanusto supported mixed SMD and PR voting, but argues that the decision to copy Japanese model was a mistake.

First, he looks at the results of the proportional vote. Parties with less than 5% of the vote are excluded, so although the initial round was 51% for the KMT, 31% for the DPP and 12% other, because no other party got more than 5% the final round came to 58% KMT, 42% DPP. There are a total of 113 seats in the new legislature, 73 single-member districts, 34 at-large seats chosen according to the proportion of the vote each party receives on the second ballot, and 6 seats set aside for the indigenous community. That means that the 34 seats are divided up according to the 58-42 ratio, giving the DPP 14 at-large seats in addition to the 13 single-member districts they won. Similarly, the KMT won 20 at-large seats and 61 single-member districts. (A couple of small parties getting a few seats here and there. See the chart above, where the SMDs are in orange and the PR in blue, with the totals in the pie chart.)

Now, in the German system, the total number of seats for each party would first be decided by the proportional vote rather than apportioned out according to a second ballot. That means that out of 113 seats, 42% (the percentage the DPP got) would be 47 seats. And the KMT’s 58% would have gotten them 66 seats. So, the KMT would only have received an additional 5 at-large seats, not 20 as happened yesterday. And the DPP would have been given 34 at-large seats, for a total of 47.

Ivanusto goes on to discuss some of the particularities of the German system, such as the occasional necessity to add additional seats, or the choice to vote for a person or a party (instead of having to vote for both), etc. Now, voting systems is complicated stuff, and I’m biased for not wanting to see any one party have total control, but from what I can understand it seems to me that the German model better represents the will of the voters than the Japanese system the Taiwanese chose to use instead.