The Children’s Wing of Budhan Theatre 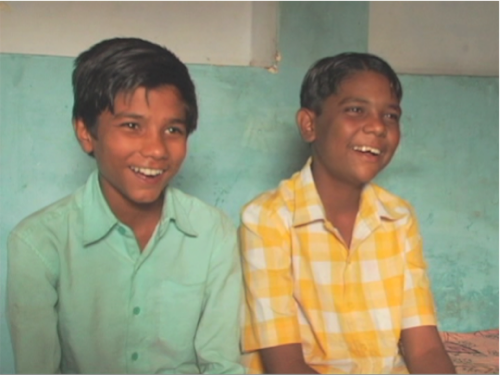 Towards the end of Please Don’t Beat Me, Sir! there is an interview with two boys who had written a play about the Budhan Theatre library: Harry and Siddharth. They admit how scared they were that someone might forget their lines. We always get a laugh when they reveal that they wrote the mother role in their play just for the girl Nandini because they knew she would be good in the fight scene. Well, shortly after we finished primary shooting, Harry’s father passed away. You might remember Harry’s father from the film. He was the one who was beaten by the police after he tried to “go straight” by opening a store. Once a promising student and playwright, his father’s death forced Harry to leave Budhan Theatre to work at his father’s shop on the main road. Now history is repeating itself as Harry is frequently in trouble with the police. Siddharth, on the other hand, was able to continue with the theater. He is still in school, now in 11th grade and studying arts.

Over six years filming in Chharanagar we heard many such stories. For several years now we have been funding the

Budhan Theatre Library and informal school program through our non-profit organization Vimukta. Now, we are happy to announce a new program to directly support the children’s wing of Budhan Theatre. We believe that this program offers children the environment and resources they need to escape the vicious cycle of police violence and crime. Just $1,600 will keep the children’s theater program running for a full year, ensuring that three members of the adult theater program are able to provide regular training and supervision as well as paying for basic supplies. Our goal is to raise $8,000 by the end of the year — enough to keep the program running through 2018 without having to fundraise every year, hopefully allowing us to begin looking at other ways we might help. We have already raised over $900, please give now to help us achieve our goal.

Vimukta is not your ordinary charity. One hundred percent of the donations we receive (after the credit card companies have taken their fee) go directly to Budhan Theatre, a grass-roots community-based organization with a proven track record. As political and cultural activists Budhan Theatre have to be extra careful in their finances. They have an external committee which double checks their books every year. Moreover, Vimukta doesn’t release a dime to Budhan Theatre until we’ve received a thorough accounting of how they’ve spent the funds from the previous year and those accounts are available to our donors. If you’d like to help out, you can do so on the Vimukta website.

This strangest of islands