This summer I developed radiating pain in my right shoulder. I’ve hurt myself in the past, and I assumed it was a muscle injury that could be treated with ice, rest, yoga, massage, etc. but nothing I did made it better. It seemed to come and go quite randomly, and the pain got so bad that I was completely incapable of focusing on my work. Further research suggested an alternative diagnosis: cervical spondylosis. Although my doctors were initially at odds over what my x-ray showed, an MRI proved that it was indeed cervical spondylosis. 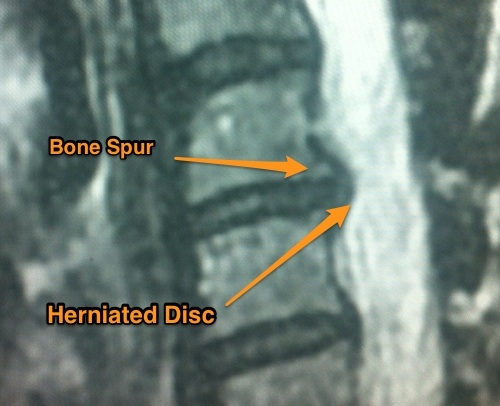 For the tl;dr crowd: I got better (mostly, anyway). But read on if you want to know why and how I beat this thing and my long-term prognosis.

According to the Mayo clinic: 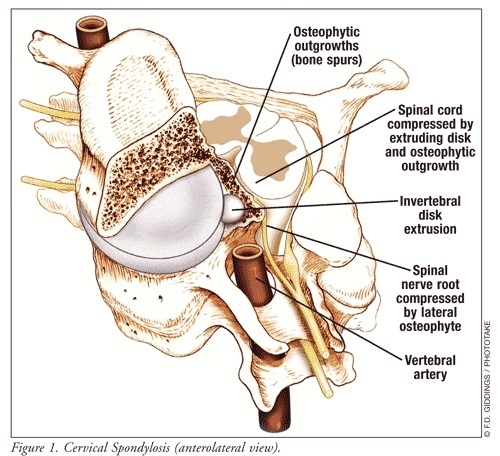 As my MRI shows, I suffer from several of the symptoms illustrated in this diagram: “invertebral disk extrusion,” “spinal nerve root compression,” and “bone spurs.” Here’s another picture that makes it a little more clear (and dramatic): 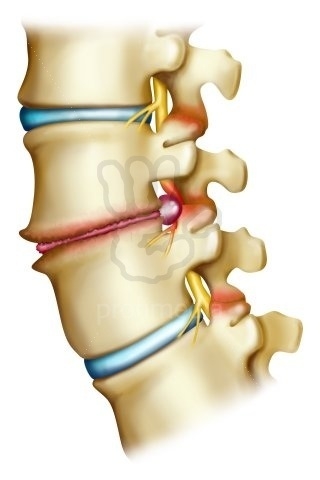 You can see how the degenerated disc (in pink) impinges on the nerve, and how the bone around the disc is ossified.

How did it get this way? The most likely cause is a lifetime of bad posture. I started to have problems over fifteen years ago. At that time I started to have neck pain, as well as pain in my hips, etc. After two years of struggle I ended up blaming the fact that I had been trying to sleep like a Taiwanese, using only a thin mattress. A switch to a proper mattress did relieve some of the symptoms, but not all. I then got an MRI which, at the time, did not show anything. Eventually I was diagnosed with a muscle spasm due to bad posture (what the orthopedic surgeon wanted to diagnose me with this time as well, before he saw the MRI). A related condition was bruxism, or chomping and clenching of my jaw during sleep.

For a while I tried physical therapy and a specially fitted mouthpiece to try to alleviate the symptoms, but after months of use I was not significantly better. I still suffered from constant neck pain. With nowhere else to turn, I tried yoga. After some investigation I discovered that Iyengar yoga teachers were particularly knowledgable and helpful about dealing with and working around physical ailments. After three months of yoga my pain went away. That was in 2002, and my condition seemed to improve with regular practice over the next ten years, until this summer.

My assumption* is that while the yoga helped alleviate the symptoms, I had an untreated spinal condition that nonetheless continued to get worse over the years. I have since learned that there are some yoga postures (like back bends) and other exercises (such as swimming the breast stroke) which one should avoid or do with considerable care if one has a cervical spondylosis. This summer I was doing both a lot of back bends and a lot of swimming. [Back bends are normally beneficial for your spine,* but if your disc is already protruding, you may be making the condition worse…]

Back to this summer. Once I got a proper diagnoses, I began physical therapy which consisted in half an hour of electric pulse massage and heat therapy followed by half an hour of traction. Traction, also known as decompression therapy, is basically a machine that pulls your head up and gently releases it over and over again for half an hour. Here is a funny picture of me getting traction therapy: 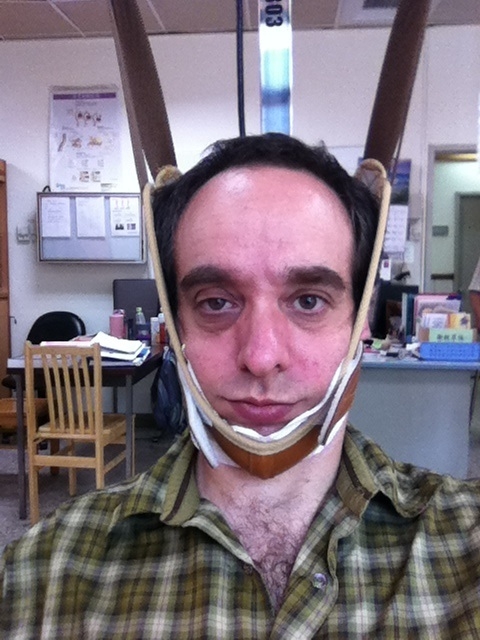 It looks uncomfortable, but actually it feels quite good. Later I learned that the stretch-release action has a very good scientific reason. Spinal discs do not get their oxygen and fluid from the blood, like many other parts of the body, but instead

are “fed” and oxygenated by the constant recycling of the disc fluid that occurs with spinal joint movement. This joint motion “sucks” in fluid filled with oxygen and nutrients and “pumps out” waste fluid.

The decompression therapy helps this process and fills the discs up with fluid. It also allows the inner fluid of the disc to return to its place inside the disc’s natural outer wall: 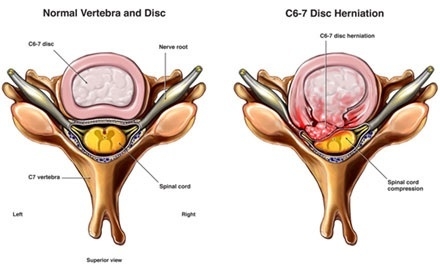 I was also given a series of neck and arm exercises I was supposed to do at home. They were similar to the ones in this video.

After about three months of this therapy I am now pretty much pain free, although I still have a very slight numbness and tingling in the tips of my fingers. I also have to be very careful since prolonged bad posture can easily aggravate my spine. Also, once damaged, the outer wall of the disc will never be as strong as a normal disc, so I need to continue to do exercises to strengthen my spine, avoid bad posture, and keep my discs filled with fluid.

During these past three months I’ve been afraid to do my normal yoga practice, but my doctor said I could do anything that did not involve inversions or arching my neck backwards so I’ve been doing a modified version of the spondylosis sequence in the book B.K.S. Iyengar Yoga: The Path to Holistic Health. In about two weeks I will be attending a conference in Chicago and I’ve made arrangements with a well known yoga teacher there to have some private classes. I want to focus on rebuilding my home-practice to strengthen my spine without risking further damage.

Before I sign off, I wanted to make one additional comment. Over the past three months I learned that most of the people I work with, including both administrative assistants and fellow professors, have some kind of spinal problems. I understand it is quite common for anyone over the age of 30… Unfortunately, most of my colleagues gave up on physical therapy before it was complete. From what I’ve learned, if the problem isn’t treated quickly, the part of the disc that extrudes from the spine can harden, making healing through physical therapy impossible. Many people simply learn to live with the pain, but in other cases they may end up needing surgery. There are now a number of surgical procedures that can be done, but if you are reading this because you recently developed radiating pain, it is wise to seek professional advice as soon as possible.* I’m lucky in that Taiwan has a decent healthcare system and the treatment didn’t cost thousands of dollars as it can in the U.S. But putting therapy off now may result in much more expensive treatment later on.

*I am not a doctor — and my experience and condition may be very different from your own. Please consult a specialist and do not treat anything on this page as medical advice.

On Sunflowers, Sunlight, and Sovereignty