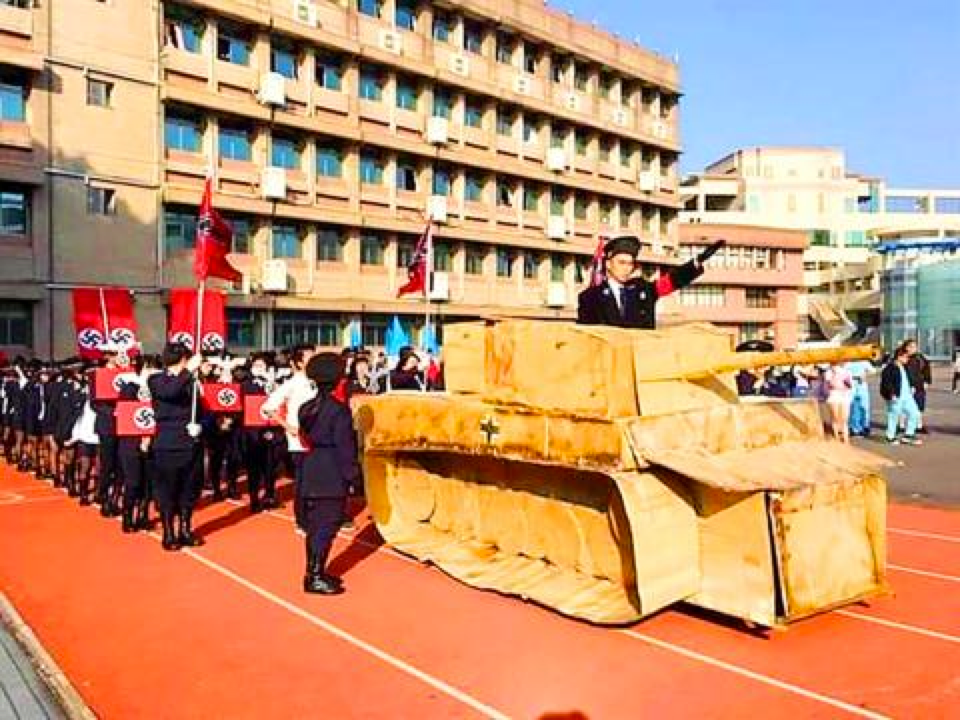 An international incident was caused when students at Kuang Fu High School, a private high school in Hsinchu, Taiwan, dressed up as Nazis as part of celebrations to commemorate the school’s anniversary. The principle has already apologized and announced that he will be stepping down early (he was already scheduled to depart in February). Moreover,

The school will hold a series of educational activities, including showing films such as Schindler’s List and Life is Beautiful, Cheng said, adding that officials from the Israel Economic and Culture Office would be invited to speak with the students.

So what can we say about this? A lot, it turns out.

1. First of all, we should point out that this kind of thing happens a lot. 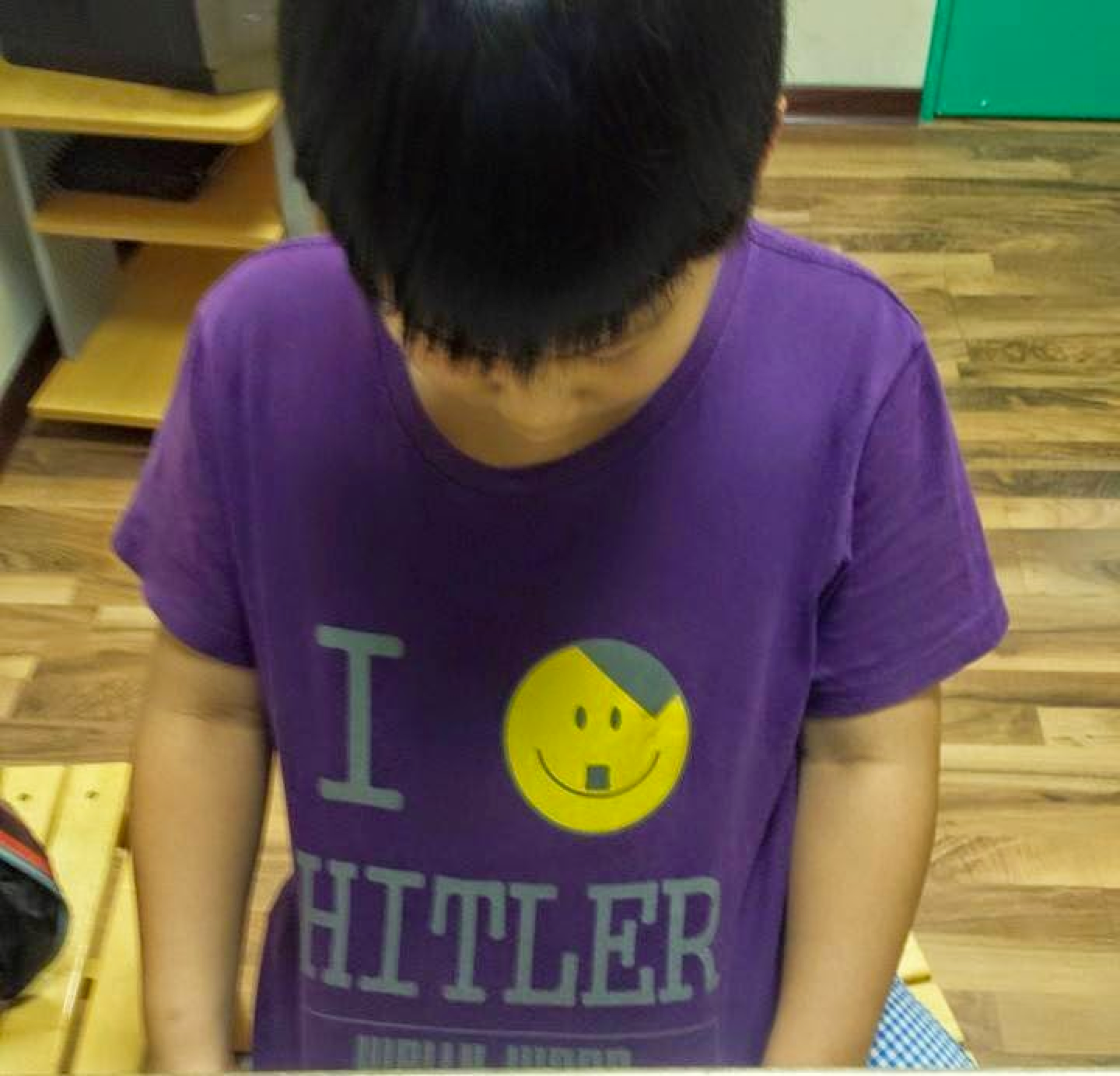 Michael Turton has been documenting Taiwan’s strange obsession with Nazi kitsch for a long time now. For the most part this kind of thing is not the result of genuine neo-Nazi beliefs on the part of Taiwanese, but the same kind of attitude that has Westerners ironically wearing T-shirts with the picture of a man responsible for tens of millions of deaths: 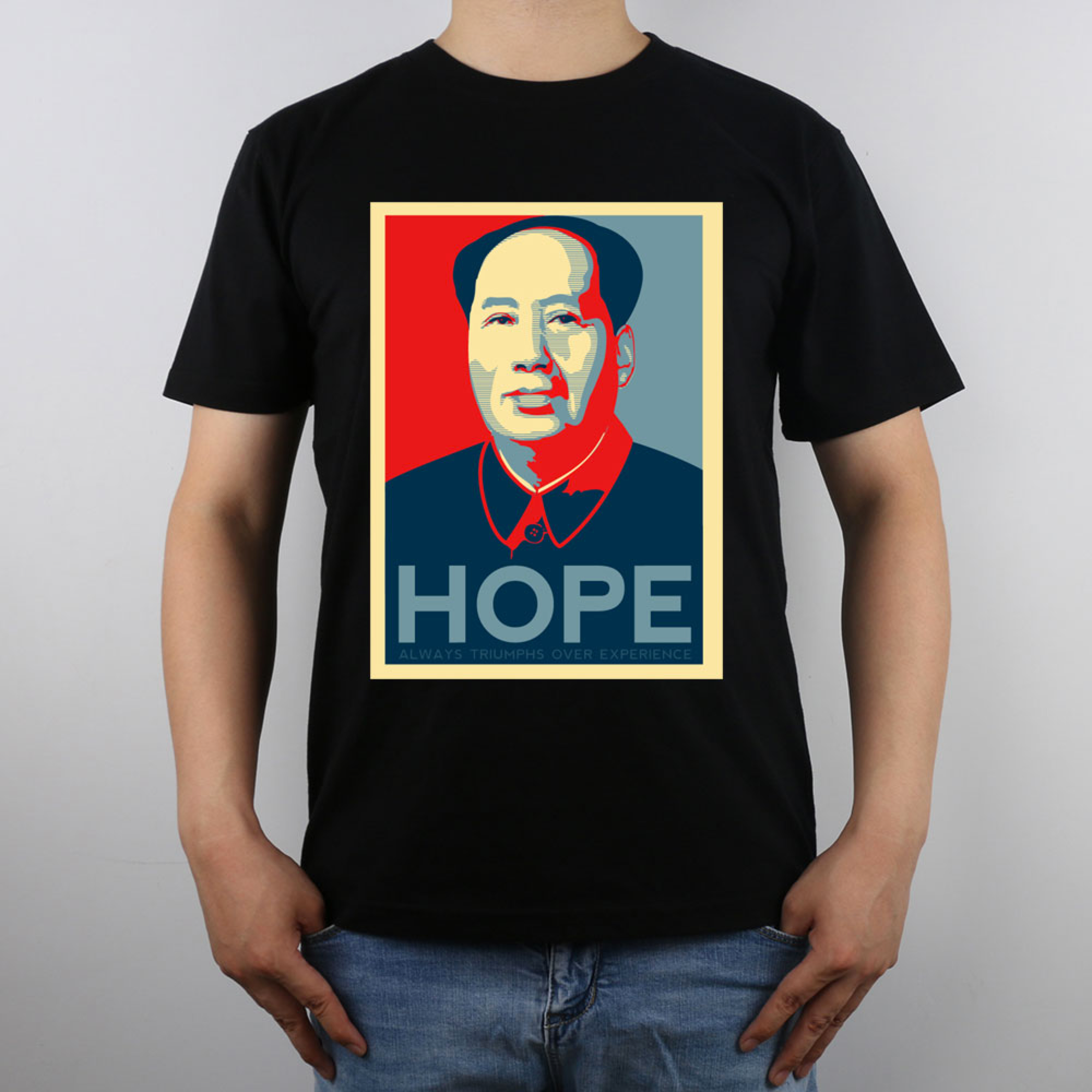 The difference being that Nazi imagery is still widely used throughout much of the world as a symbol of ethnic hatred.

2. Nor is it the only tasteless thing the school did that day.

On the same day they did a re-enactment of the 1930 Wushe Incident, in which indigenous Taiwanese attacked and killed hundreds of Japanese, bringing down the wrath of the Japanese colonial government and much more bloodshed. But that isn’t all, during the reenactment they shouted “Fight the Japanese Devils, Restore our Chinese people!” 「打倒日本鬼子，光復我中華民族」This is problematic because of the way it re-colonizes indigenous people by making them. As Michael pointed out on his blog, “the name of the school, is the KMT code term for the ‘restoration’ [Kuang Fu 光復] of Taiwan.” (And in 2013 they also did a rather inappropriate dance dressed as members of the Tao tribe of Orchid island. )

Indigenous activists have long been fighting for a true “restoration” of Taiwan, one that sheds not just the legacy of Japanese colonialism, but that of the KMT as well. In one incident , an activist spray painted graffiti on a police station in a town also named “Kuang Fu,” asking “Who’s retrocession?” and demanding that the town be restored to its original indigenous name.

3. Forget the Holocaust, Taiwanese don’t even know their own history

In 2015 students occupied the Ministry of Education over controversial changes to the history textbooks. Activists were upset that changes to newly proposed textbooks “misrepresent history, gloss over the KMT’s role in the 228 Massacre and the White Terror, and impose a China-centric curriculum.” After the Nazi cosplay incident, someone in Taiwan’s semiconductor incident wrote a letter to the Liberty Times newspaper explicitly raising the issue of Taiwan’s continued inability to face its own history, pointing out how many monuments Taiwan still has to its dead dictator.

Personally, I still feel about these issues of history education the way I did then. As I wrote in a Facebook post at the time:

True, a textbook shouldn’t just be propaganda for the ideology of the ruling party, but I think it’s even more important that students be taught how to evaluate historical claims for themselves and not just be asked to memorize a textbook for their exams. No matter what the textbook says, that’s not learning history. And if they did learn that skill (how to evaluate historical claims), then it wouldn’t matter so much what the textbook says. Taiwan doesn’t just need a new textbook, it needs a new curriculum.

(After I wrote that, the same point was made more eloquently by a history professor writing in Chinese.)

4. Even as Taiwanese should learn their history, we should be wary of the sacralization of the Holocaust

Corey Robin wrote about this in the context of a critique of Elie Wiesel, saying that “the Holocaust and Israel have replaced God and halakha as the touchstones of Jewish experience and identity.” As he says in response to something Wiesel wrote:

The Holocaust not as an event in secular history but as a leap into transcendence; it cannot be explained, it can only be circled, like a holy fire. Auschwitz is our Sinai, the ovens our burning bush. Like the Jews receiving God’s commandments, the Jews of the camps experienced a sacred mystery, received a secret message, which we can only approach at a distance, with awe and trembling. I, the Holocaust, am your God. Thou shalt have no other gods before me.

Back in April I wrote about the importance of the Holocaust in developing Jewish identity:

During my weekly Hebrew school classes, as well as related weekend activities and camps, we almost never discussed Jewish religion, ethics, or philosophy. Instead, we were taught to think of ourselves as victims of historical persecution stretching back to the dawn of time. We were taught the importance of maintaining our ethnic identity in the face of this persecution.

I’d also like to point out that (like me) Corey Robin also hates Schindler’s List which is what the High School students in Hsinchu are going to have to watch in penance for their crimes….

Having said all that, I’m actually not entirely convinced that Taiwan is free of antisemitism and that all Nazi memorabilia is just “kitsch.” 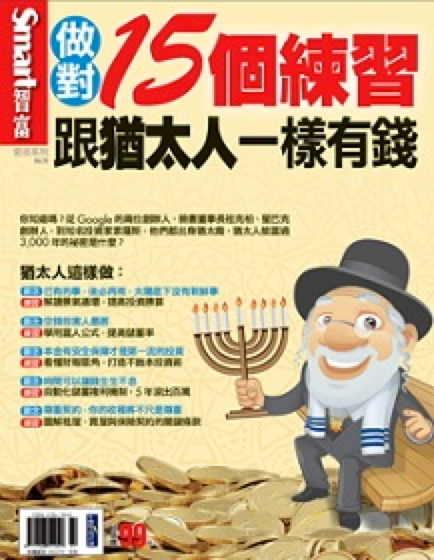 Above is the cover of a Taiwanese magazine promising to tell its readers how to be rich “like a Jew.”

It is in the context that I want to share one of the few upsetting personal experiences I have had as a teacher in Taiwan. All faculty are assigned a number of “advisees” we take out to dinner a few times a year and get to know personally. One day one of these advisees, over dinner, showed me a prized possession: a very authentic looking Nazi ring. I remember looking at it in curiosity, then suddenly understanding what I was looking and jumping up from the table in shock. I couldn’t look at or talk to the student and had to get colleagues to intervene and help deal with the situation. I just couldn’t understand how anyone would be proud to own something like that, and then show it to me. In the end the student was asked to do something very similar to what was asked of these students: watch some movies, read some books, and write me a letter. Which he did. A very nice letter actually - although to be honest I still felt uncomfortable around this student until the day he graduated.

Politics as a Vocation