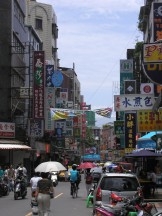 Pictured here is a typical Taipei street scene, captured wonderfully by a computer science professor at Columbia. (I found the picture using Google.) Here are some more of his pictures from Taiwan. I post these here to make a point. You see, Taipei is one of my favorite cities on this planet! It may look chaotic, but in many ways Taipei is actually cleaner than New York. It certainly doesn’t stink as much in the summer because people are personally responsible for carrying their trash to the garbage truck every night, rather than leaving it on the curb to rot. It is also incredibly vibrant, even more so than many parts of New York City, despite the fact that it has only a third of NY’s population. But here in Jackson Heights, NY, where I live now there is one City Council Member, Helen Sears, who is worried about the “visual chaos” of non-regulation street signs ruining the very fabric of the city!

Businesses are taking down perfectly good awnings in parts of New York City. Why? Because the owners were told the signs are illegal.

Also because the city needs money. Without any warning or information about the regulations (not changed since the sixties), fines of up to $5000 were suddenly being charged.

“I didn’t know a law like this exists. … I thought it’s a joke. And I laughed in his face” said Eli, another store owner.

Fortunately, City Council voted unanimously to overturn this law. With one exception. Helen Sears. Here is what she had to say to defend her vote:

These illegal awnings are usually too large, filled with a great deal of information, and sometimes are neon.

Information!? In Neon!? Heaven forbid!!! But it gets worse. It turns out that this will be the end of our civilization as we know it:

This “visual chaos”, as I call it, affects a neighborhood and sends a message to the street that says: “there is no order here … people can do whatever they want … throw your garbage anywhere you like, its O.K. … we don’ enforce the law around here … double park if that’s convenient for you … put your hosehold trash in the corner basket … honk your horn whenever you feel like it … anything goes enjoy yourself.” This message has the potential to destroy community stability. As a result, by allowing the continued erection of illegal awnings and the perpetuation of this visual chaos we also allow our social fabric to be chipped away at and we will see an increase in illegal posting, handbills on car windshields, litter in the street, et al. [sic.]

But there is some good news. It turns out she is “not opposed to modifying the law to include a business phone number and an increase in the allowable font size.” Isn’t that understanding of her? [Quote from “View From the Heights” Vol. 15, No. 3, p. 9 — a publication of the

NOTE: The picture just happens to be of the street I used to live on … ah, memories of good Taipei street food. These days you can’t even get a decent knish in NY …