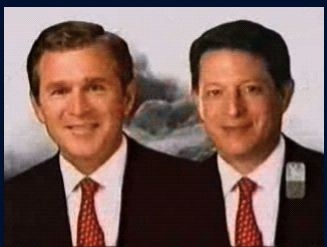 Nothing seems to get Democrats more upset these days than memories of the Nader campaign. In Rage Against the Machine’s music video, Testify (produced by Michael Moore during the last presidential elections), alien beings take control of America by running cloned candidates against each other. The video cut between Al Gore and George Bush, both saying the same things. The argument was simple: there is no difference between Gore and Bush, so vote for Ralph Nader. Democrats point to Bush’s record in office and declare: “How can you say there was not difference!?” And they worry that Nader might run again — “spoiling” the race for the Democrats. While I don’t think much of Nader’s campaign in the last election, and I don’t think he should run again this year, I would like to argue that both of these “truisms” are greatly misleading and have the effect of short-circuiting the thought process necessary to understand what needs to be done to restore some semblance of legitimacy to our government.

I’ll take the easier issue first. Nader’ didn’t “spoil” the elections — Gore did. (OK we all know Jeb Bush did, but lets leave that aside for now.) Gore lost his home state. He lost states where Democrats were elected to Governor and Senate. He is the one who failed to differentiate himself from Bush:

Al Gore had been elected and re-elected to both the House and Senate from Tennessee. His father had also served for decades in the Senate. Nevertheless, he failed to carry his home state, 47% to Bush’s 51%. Nader’s 20,000 votes in Tennessee would not have made any difference. The same story happened in Bill Clinton’s Arkansas, which Gore lost to Bush, 46 to 51%. Nader’s 1% in Arkansas didn’t affect the outcome. West Virginia is so Democratic that Republican presidential candidates have carried the state only three times in the previous half century. Nevertheless, Gore managed to lose West Virginia by five percentage points to Bush. Nader’s 10,000 votes in West Virginia were well short of the margin of difference between Bush and Gore. Had Gore carried either his own home state, or even West Virginia, he would be president today.

His failure didn’t need Rage Against the Machine music videos in order to be understood. The video worked because it played on what everyone already knew. My guess is that, if that music video did anything at all, it probably motivated young people to vote for Nader who would not otherwise have voted at all. As it happened, “only 13% of eligible young people cast ballots in the last presidential election.” Rather than blame Nader, blame Gore for failing to mobilize young people the way Howard Dean seems to be able to do.

The argument against Nader also gives Nader too much credit. If anything, it was Bush who managed to blur the boundaries with Karl Rove’s brilliant “compassionate conservatism” shtick. But, and here is the real difference between Bush and Gore, while Gore really believed the centrist line he espoused, for Bush & Co. it was simply an electioneering ruse. I believe that Gore would have honestly tried to put into action much of the agenda he endorsed during his campaign, while Bush was simply lying in order to attract swing voters. So, the swing voters would have done better to vote for Gore, but core Republicans got more from their vote than core Democrats could have hoped to get for theirs. Guess which side turned out more people to vote? The numbers amongst minority voters were particularly low. I guess Nader didn’t offer them much reason to go to the polls either.

The second issue is more difficult to asses, because without Gore having held the post of President after 9-11 it is hard to know how different he would have handled the situation. We can only really judge on the basis of Clinton’s record — but while Gore sought to distance himself from Clinton-the-person (and Monica Lewinsky), he did little to distance himself from Clinton’s Third Way politics. I’d just like to point out three aspects of Clinton’s record that I believe paved the way for Bush’s draconian policies. I’m not saying that Clinton’s record is any where near as bad as Bush, just that his centrism made Bush possible. I’m arguing that Clinton failed to provide the kind of moral leadership this country needs in order to step back from the brink of fascism.

…Clinton did a lot more than temporarily suspend habeas corpus. One of his bills that has been enacted into law guts the rights that Thomas Jefferson insisted be included in the Constitution. A state prisoner on death row now has only a year to petition a federal court to review the constitutionality of his trial or sentence. In many previous cases of prisoners eventually freed after years of waiting to be executed, proof of their innocence has been discovered long after the present one year limit.

“Earlier today, I ordered America’s armed forces to strike military and security targets in Iraq. … Their mission is to attack Iraq’s nuclear, chemical and biological weapons programs and its military capacity to threaten its neighbors. … Saddam Hussein must not be allowed to threaten his neighbors or the world with nuclear arms, poison gas or biological weapons.”

The welfare legislation affected many social service programs-Aid to Families with Dependent Children (AFDC), food stamps, school meals, summer meals, Medicaid, SSI, child care, etc. Some of the changes in these programs, such as in food stamps which is 100% federally funded, have already been enacted. For other programs, such as AFDC, the federal government has changed its funding formula, eliminated the federal guarantee of benefits, and given the states greater discretion in how to shape their own welfare systems without ensuring an adequate uniform standard of help for poor households.

Even if the effects of welfare reform were softened by the introduction of the Earned Income Tax credit, the willingness to cave in to conservative rhetoric blaming the poor for their own poverty, has made Bush’s policies all the more palatable to the American people.

In many ways, what I’m saying isn’t too different from the arguments raised by George Lakoff, about “framing” issues. But I think many people reading Lakoff saw it simply as a matter of having a better campaign strategy for the democrats. It isn’t. It is about providing the moral leadership necessary to move this country in a different course. As I said in an earlier post:

It isn’t enough to critique neoliberalism, or to refine it — the left needs to present a coherent alternative. Most importantly, the left needs to take the issue of inequality seriously, and no longer pretend that more efficient markets will magically make the problem go away. I sometimes feel that what most Democrats want is “compassionate conservatism,” and that they are simply upset that Bush didn’t deliver what he promised. Sure, Clinton looks better in hindsight, but it was the left’s embrace of Clinton’s neoliberalism that allowed Bush to happen. We need to draw a line in the sand and make it clear where we stand — not simply re-frame neoliberalism to make it more appealing to liberals and conservatives alike. The right’s already done that for us!

Yes, I think it is important for a Democrat to be elected in the next election, and yes, I think it would be a bad idea for Nader to run, but blaming Nader for what’s happened is stupid. It is important to understand the tremendous lack of moral leadership displayed by Clinton-Gore, and to ask more of our Democratic candidates. Otherwise it will be Jeb Bush in the White House in 2008!

UPDATE: What do you know, as I was writing this post, Calpudit posted this:

So go for it, Ralph. Let your hate consume you and soon you will be a slave to the dark side. We need someone like you to help our fundraising efforts.