For much of history, the science of biology was the science of classification. As can be seen by the text accompanying this image (from a web page on “New Zealand polychaetes“): 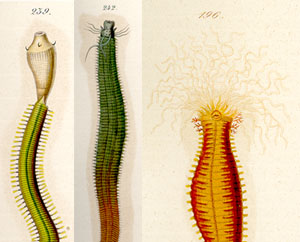 Schmarda was the first significant investigator of New Zealand polychaetes, visiting the Auckland area in 1854, later describing 21 new species. Here is a composite image of three of his colour paintings of New Zealand polychaetes: Glycera ovigera, Platynereis australis, and Terebella plagiostoma. The nereidid is a female epitoke Schmarda placed in the now disused genus Heteronereis.

What enabled Schmarda to make his contribution to the study of worms “characterized by fleshy paired appendages tipped with bristles on each body segment” was a system of taxonomic developed by a Swedish botanist in the 18th century, known as Linnaeus (Carl von Linné). Although expanded considerably since Linnaeus’ time, the system he developed is essentially the same one used today; but, in a fascinating post over at The Panda’s Thumb, we learn that the future of this system is being hotly debated.

Recently, this has come to a head with a proposal known as the Phylocode, which is intended to replace Linnaean classifications with something based on the phylogenetic (evolutionary) history of the species

The idea being that

… instead of Linnaeus’ serried ranks of armies of organisms arranged neatly and hierarchically into divine patterns or battle formations, we have classifications as hypotheses that can now be tested by different characters or by adding other taxa into the analysis.

Seems straightforward enough. However, from John Wilkins’ post we learn that it is anything but:

This is more scientific. Is it less political?

No, it isn’t. If there is any science that is political, it is taxonomy. Taxonomists become highly charged with emotion and verve when their preferred ideas are under threat.

… There are those opposed and those in favour, and the two groups are treating this with all the gusto required by the Kissinger dictum (Academic politics are so vicious because the stakes are so low, which he took from someone else in a fine irony). I watch one botanist break down in tears when he responded to Brent Mishler, of the University of California, Davis, arguing in its favour.

Wilkins argues that Phylocode will fail because:

… this is a matter of convention and ease of communication. These classifications are not natural classifications, and conclusions about the organisms cannot be drawn from them — you cannot, for example, compare the rates of evolution of higher taxa like an Order, because there is nothing to compare — Orders are artificial.

In other words, the new system, although grounded in scientific principles, is ultimately no less arbitrary than the old system. Something that I have noticed about many attempts to rationalize language, such as spelling reforms. True, some sign systems are more rational than others, but no system (even mathematics) can be completely self contained. Since we have to live with a certain amount of arbitrariness in our communication, all sign systems ultimately rely upon institutional norms to regulate themselves. That is to say, all forms of human communication are ultimately political.

It is interesting, in light of this insight, to look at the debate on prescriptivism. In a recent exchange between Scott Martens and Mark Liberman it was agreed that

… language in its social context has normative elements that we can not ignore. It would be better to embrace them and make our prescriptivism rational instead of leaving it to nonsense merchants in the Times.

I would add that there are good political reasons for replacing one form of prescriptivism with another. For instance, “rational” (sorry, I can’t help but put that word in scare quotes…) prescriptivism of the kind advocated by Mark Liberman has the benefit of being far more tolerant and accepting of linguistic variation than is traditional prescriptivism. At the same time, however, I think the normative nature of language in its social context means that Linguists will be doomed to forever rail at prescriptivists. There is too much at stake. What is at stake is clearly shown by the basic categories of Linnaeus’ taxonomy:

No amount of rationality is going to topple that!