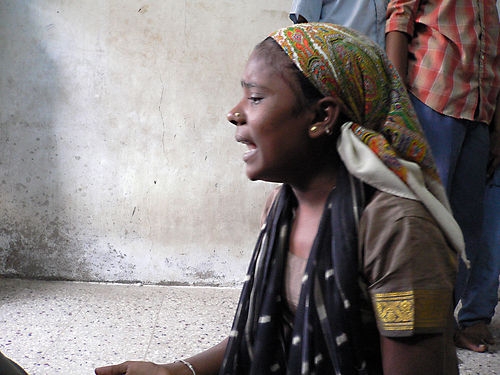 When I took this picture I didn’t know the name of the girl. Now I do. It is Poonam, and she wants to be a doctor when she grows up. The thing is, she is now 14 and that is the time when most girls in Chharanagar get married. Her older brother was pressuring her to leave school and get engaged. It seems that she was saved by this picture!

I’ve never published a single one of my photographs, but when reporter Sonia Faleiro went to Chharangar to write her excellent article for the Indian journal Tehelka, there was something wrong with her digital camera and she couldn’t get the kind of large-format glossy pictures the magazine needs. So she asked me if she could use some of my Flickr photos for the story. I said yes, and the above picture was the one chosen to lead the story. They touched it up and it looks even better than it does here.

Poonam is the top student in her class, loves English class, and is a reporter herself — she edits the newsletter that the Chhara children publish by themselves. Her parents are uneducated, but her gradmother finished seventh grade and helps the children with their schoolwork. She reads everything her granddaughters do.

When her parents saw Poonam’s picture in the newspaper, the decided that her work with the theater and her education wasn’t such a waste of time after all, and they decided to allow her to put off the engagement for now and allow her to continue school.