In the States, it is customary to wish people a happy new year. In France, I’ve been learning, that is insufficient. “Happy New Year” is just the beginning. This should be followed by the statement that you hope the year will bring good health, happiness, prosperity, and success, or some combination thereof. This is true when greeting a friend and true when greeting an acquaintance, such as your regular newspaper vendor.

The Paris city government has played on this idiom in a poster that has appeared all around town: 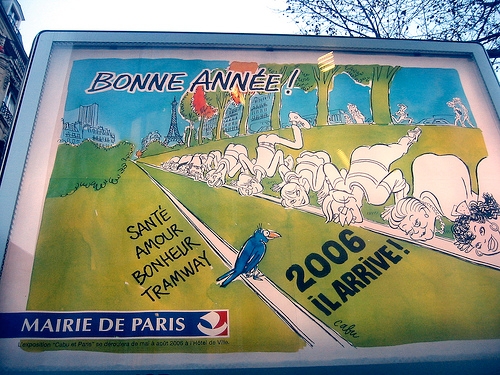 Paris is completing a new tramway line, as previously mentioned on Keywords, and it is due to be completed in 2006. This is a nice bit of propaganda by the Socialist city government’s in-house cartoonist, Cabu, as part of the ongoing polemic between the Socialists and Greens, on one side, and the Gaullists on the other, over public transport in Paris.

Using New Year’s greetings for political ends is not the exclusive purview of the Socialists. Gaullist President Chirac has been using the occasion to lay out his political agenda for the remainder of his term. It is widely assumed that French citizens’ rejection of the European constitution in the referendum that he called has doomed his chances of running for a third term in 2007. This is combined with his low ratings in the polls, and concerns about his age and health. To counter these negative impressions, and to give a boost to his remaining time in office, Chirac’s greetings have been brimming with initiatives. Among them, he has promised to reinforce the law that pushes political parties towards greater presence for women in elective office, and he has promised to get the abolition of the death penalty written into the constitution. (Numerous commentators have pointed out that both of these laws were originally Socialist initiatives.)

The president’s greetings are not a simple one-shot affair. He spends a whole week on his greetings. New Year’s Eve is the occasion for greetings to the nation as a whole, but then there are greetings to more specific groups. On January 3rd, he receives and replies to greetings from constitutional council and the members of his government, in two separate ceremonies. On January 4th, he greets the press. On January 5th, he greets the representatives of the private sector, including both business and civic organizations, trade unions, and employers’ associations, and known collectively by the wonderful term forces vives, a term which otherwise means kinetic energy. And on January 6th, he greets those who work in the public sector.