Teaching Anthropology “In The Field”

This is a view of the building where I work. The College of Indigenous Studies at National Dong Hwa University, in Hualien, Taiwan. 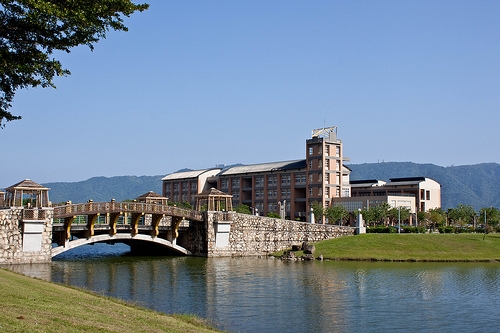 And here is a picture of the view (on a more typically cloudy day) looking back, from the balcony near my office. 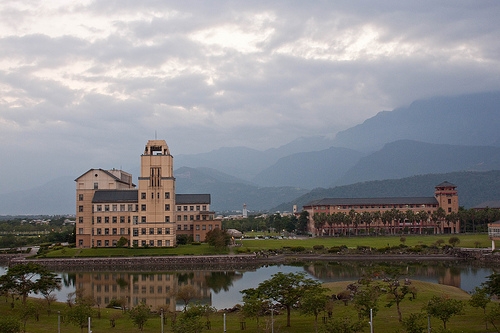 Most of the people who live on the East Coast of Taiwan reside in a narrow valley between the Coastal Mountain Range (top picture) and the larger Central Mountain Range (bottom picture). The valley starts in Hualien city, and continues down about about a hundred miles, to the next coastal city, Taitung. About thirty miles south is the village where I did my fieldwork. Apart from the great scenery and the chance to improve my Chinese, that is one of the main reasons I took this job. But it is now four years since I came here and I can count on one hand the number of times I’ve made that thirty mile trip. That’s what I’d like to talk about in this post. I think the reasons give some insight into what life is like as an expat professor in Taiwan, what it means to teach near your field site, as well as some of the unique aspects of my current situation.

There are a number of reasons why I spend so little time at my old field site. One of them is that, as they say, “you can’t step in the same river twice.” It’s been a decade since I did my fieldwork, and the people I knew there have mostly moved on. I worked in an elementary school, and few people stay in the same place for more than four years. Some I’m still friends with. A teacher who teaches in the mountains south of Taipei, a baseball coach who is currently staying at my cousin’s house in Ohio has he studies for his Ph.D., and a few others I see now and then. But there are only a few people I know still living back in the village.

The other reason is that I’m busy. Taiwanese teachers typically have a 3-3 teaching load, as well as the usual advising and bureaucratic responsibilities. Since I arrived here I’ve developed over eleven new course syllabi — all of which I teach in Chinese. I mention this because it means I need to spend about four times as long preparing my courses as I would if I taught in English. The knowledge that almost all of my colleagues completed Ph.D.’s in Western Universities keeps me from making too much of my language situation. One get’s a lot more leeway teaching in a foreign language than one gets as a student, and I certainly couldn’t write a dissertation in Chinese, not to mention a term paper. Even now, for academic promotion, my colleagues are expected to publish and present papers in English whereas I can get by without having to write much Chinese at all.

The thing is, when I came they told me that I could teach in English because the government is trying to promote more English language classes. I tried it for a semester, but soon gave up. For one thing, less than a fifth of the students had sufficient English skills to follow me. Another reason is that we need at least ten students to get full credit for an undergraduate class. Although Taiwanese teachers get double credits for teaching in English — the same doesn’t apply to me as a foreigner, even though the problems I face are the same. But, over time, I’ve gotten better at it. The Ph.D. Cultural Theory course, which used to be the one class I did teach in English, I taught in Chinese (or Chinglish) this year. I still depend mostly on English language texts (giving my students translations when possible), but this semester was the first time I used a Chinese-only text in one of my classes, something I hope to slowly increase over time. [See this post I wrote some time back about the lack of texts in translation.]

But the biggest reason that I return to my field site so rarely has little to do with how busy I am teaching, and everything to do with how busy I am when I’m on break. Just at the time I got this job I was embarking on what turned out to be a four year project working on a documentary film in India. This has been one of the most exciting things I’ve ever done in my life, and I don’t regret it for an instant, but it does mean that when I do have a break I’m often jumping on board a plane to India (as, indeed, I’m doing again in about ten days time).

Despite everything I’ve said, I don’t mean to imply I haven’t been doing new research here in Taiwan. I have! About a year ago I started a series of posts on learning an endangered language and after that I interviewed some indigenous language teachers. While that work has been on hold over the past few months, I hope to take it up again as soon as we return from India. There is a paper I want to do on the subject and my New Year’s resolution is to get a first draft done by the end of the summer, and to turn it into a research proposal by the end of the year (when the National Science Council research deadline is).

Speaking of papers. Although it took me about three years to get into a schedule that works for me, I have lately also begun to figure out how to crank out those papers — something I need to do a lot more of if I’m going to pass the six year review required of all Taiwanese academics. Although there are the first inklings of a shift towards book-length manuscripts at some research institutions, here the focus is still on academic papers. A lot of credit is given for journals listed in the Social Science Citation Index which is annoying, since so many great anthropology journals aren’t listed there. My department has been supportive in giving me some credit for my online and multimedia work as well. I’m hopeful that the documentary film will be able to be included in my review.

One thing I’ve had to cut back on is conferences. It is just too costly and too time consuming to attend too many conferences from here. The school and the National Science Council do give faculty some support, but as much as I’d like to go to more conferences, I need to spend that precious time working on getting those papers out. I think, in general, this is true for junior faculty no matter where you are — but the distance (and jet lag) makes it even more true. To the extent possible, I have been trying to attend regional conferences, which can often be an exciting way to explore the region and (of course) network.

So, that’s why I don’t spend much time in my field site. But I’m learning a lot just by living and working here. For one thing, about half the students in our college are Taiwanese Aborigines, which is quite remarkable when you think that less than two percent of Taiwanese are Aborigines. Being a good teacher and advisor means learning from my students, which means being a good ethnographer. (Hopefully I can write some of that down in another blog post sometime.) Whether it is student term papers on indigenous issues, or problems advisees are facing at home, I’m picking up a lot about indigenous life by osmosis.

Below is video of a graduation day ceremony featuring cultural traditions from many of the different indigenous communities represented at our university:

In a way, I feel like I am now, a decade after I finished up my dissertation field work, finally ready to begin the task I started at that time. I feel that my first four years teaching here have given me a very special kind of training. And the learning process has made being a junior faculty member that much more exciting than it might have been otherwise. So even though I rarely go back to my old field site, it has still been a fantastic learning experience for me. Even though there may be limited opportunities for Ph.D.s to get academic appointments within the US, with the increasing globalization of higher education there are more and more opportunities abroad. I hope that this post might help others decide if doing so is right for them.