What is at stake in the Chicago Teachers Union strike? Here are some links to articles I’ve found useful/interesting in the form of a FAQ. I will attempt to keep this post updated as best I can.

What are teachers in Chicago striking about?

Diane Ravitch has a good summary.

None of this is true.

And a more in-depth overview at Mother Jones: What’s Happening With the Chicago Teacher Strike, Explained

And this post, by a parent and former teacher is also a good corrective to some misperceptions about the union’s demands.

How bad are American schools? 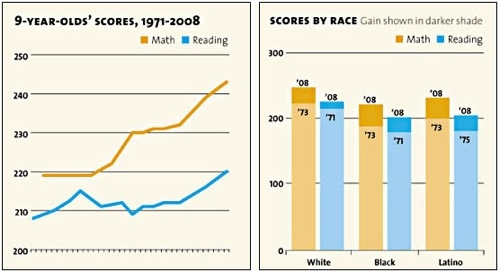 We have plenty of failing schools, and we should be doing a lot more to figure out how to fix them. It’s a disgrace for a rich country like the United States to be failing so many of its kids. At the same time, taken as a whole, the American educational system isn’t in decline.

But, at the same time, “It’s Better to Be a Poor Student in Almost Any Rich Country but the U.S.”

the United States has a very low level of upward mobility in its education system, it also has a shockingly high level of downward mobility

Poverty. Or, more accurately, poverty combined with a neoliberal ideology that displaces that blame upon teachers.

Indeed, conservative statistician William Sanders of the University of North Carolina, the leading proponent of “value added assessment” in schools, has declared flatly: “Of all the facts we study—class size, ethnicity, location, poverty—they all pale to triviality in the face of teacher effectiveness.” Such views might make sense if the issue were simply raising the average achievements of students, which is, of course, dependent on teachers. Instead, the issue is closing the gap between the differentials in average achievement of students from widely unequal class-race backgrounds (including students who are impoverished and homeless), which is to demand nearly the impossible of mere schools and teachers.

Indeed, to adopt a conservative, “no excuses” philosophy toward the achievement gap is to close one’s eyes to the fundamental reality—child poverty. It is this, says David Berliner, professor of education at Arizona State University, which constitutes the “600-pound gorilla that most affects American education today.”

Or, put another way,

while teachers are the most important factor within schools, their effects pale in comparison with those of students’ backgrounds, families, and other factors beyond the control of schools and teachers. Teachers can have a profound effect on students, but it would be foolish to believe that teachers alone can undo the damage caused by poverty and its associated burdens.

Well, if it teachers aren’t the problem, surely their unions are?

Well, there isn’t any evidence of that, and there is some good evidence that unionization actually helps.

No coddling teachers: that must be the reason the South leads the country in educational attainment, and in particular why Georgia’s students so outperform students from union-ridden Massachusetts and New York.

And when they do succeed, they often do so at the expense of public schools:

Funny enough, the same teacher who was considered an obstacle to improving test scores in a private school was then considered at star teacher at a charter school — making half as much.

Well, even if they aren’t the problem, don’t teachers make too much money?

It varies quite a bit.

So What If Teachers Are in It for the Money?

It’s not just that teachers are disrespected but that teaching is not even considered a worthwhile profession, and that attitude is being fostered not by the meanie Right (whom we blame for all our woes), but the liberals and the so-called “Left.” Teaching requires training and skills, but you wouldn’t know that from some of their biggest supporters who keep hammering the point that teachers are in it for the love.

Why do people hate teachers unions so much anyway?

Perhaps it is “just an inevitable result of the movement to reduce teachers’ educational autonomy by reducing what they do in a classroom to a student’s score on a multiple-choice test.”

Perhaps it is because teachers are seen as having opted out of the capitalist system?

Maybe gender has something to do with it?

teaching has historically been considered and demeaned as a “woman’s profession,” and that female teachers are perpetually seen as caretakers in the classroom while their male counterparts are considered pedagogical figures from the minute they enter classrooms

And it is interesting to note that “the nation’s first teachers’-only union, the Chicago Teachers Federation, was founded by two pissed off lady educators…”

OK, but what about evaluation? Surely we should keep tabs on how teachers are doing?

Please read this [pdf]: Misconceptions and Realities about Teacher and Principal Evaluation. Basically, the evaluation measures aren’t yet ready to be used in this way, and there are some concerns about the particular forms of evaluation that are being considered.

Not necessarily, and avoiding the damage of neoliberal reforms may help students more in the long run.