I frequently get approached by academics who would like to find a university teaching job in Taiwan, so I thought I’d share my standard advice as a blog post.

First off, this is not a blog post about finding English language teaching jobs in Taiwan. Most universities treat language teachers differently from other faculty and while I don’t agree with that policy, it means that the experience of English language teachers in Taiwanese universities is quite different from what I’ve experienced and so I’m not qualified to talk about it. The best I can do is direct readers to discussions on Forumosa, Taiwanese, and Facebook dedicated to the subject.

Secondly, the most important thing to know about higher education in Taiwan right now is this graph which shows the drop in university enrollments as a result of the shrinking student population: 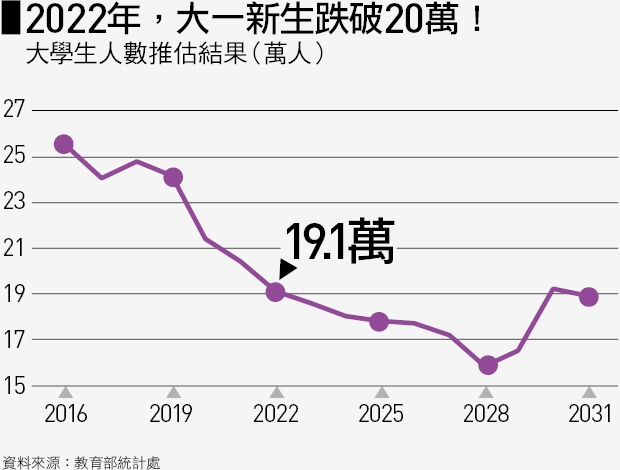 The end result is that, over the next decade, Taiwan will be closing many of its universities and downsizing and merging departments at those that don’t close. This means that right now is a particularly bad time to be a foreigner looking for work in Taiwan. Doesn’t mean that it is impossible - people retire and many departments are still conducting job searches, but competition is fierce.

Third, if you are looking for jobs, this is the web page you want to bookmark. Unlike Hong Kong and Singapore where jobs are usually listed in the major international job listing sites, Taiwanese universities tend not to advertise outside of Taiwan. Part of this is because most (but far from all) jobs require Chinese proficiency, but it is also a reflection of the general insularity of Taiwanese higher ed. Whereas many academic departments in Singapore and Hong Kong can have as many as fifty-percent foreign faculty (if not more), Taiwanese departments that aren’t focused on English teaching rarely have more than one foreigner. But all jobs are required to be listed on the Ministry of Education’s website, so if you do read Chinese it is easy to stay abreast of new job openings via that link.

So what does it take to compete for a job in Taiwan? Like everywhere else, publications are key. Taiwanese universities are eager to boost their international rankings and they see hiring faculty who publish in prestige journals as one of the key ways to do this. For academics in the social sciences, this effectively means publishing articles in journals that are listed in the Social Science Citation Index (SSCI). Previously books did not count for much, but some universities in Taiwan are now promoting book publications as well.

Beyond that, however, it is also hard to get a job here without some personal connections. This is true everywhere, even if nobody wants to admit it, but if you aren’t based in Taiwan you might have a difficult time getting taken seriously as a job candidate here. Nobody wants to hire someone who will leave as soon as they get a better job in the US or Europe. For this reason I frequently advise people who want a job here to first apply for a postdoc (even if it is unpaid) and spend some time getting to know people in your field. This will also help you better understand the departments you are applying to, allowing you to prepare a better application.

Is it necessary to speak Chinese to teach in Taiwan? If you are able to teach at one of the top universities in Taiwan, teaching in English is not a problem. And many other universities are trying to promote English language courses. Having said that, even if you can teach in English, most universities are Chinese work environments. You can expect dozens of (often important) Chinese emails each day, and faculty meetings are held in Chinese. (See what I said above about few departments having more than one foreign faculty member.) Even if courses are offered in English, most students outside of the top universities lack sufficient English ability to follow the material without some assistance in Chinese. Most of the people I know teaching in the social sciences in Taiwan are fluent Chinese speakers with a high level of Chinese literacy as well.

How well does it pay? The salaries at public universities are pretty standardized (unless you are a famous scholar, in which case they might be able to pay you more than the standard rate for Taiwanese). This PDF lists the salaries. As you can see, these are rather low by international standards. In terms of US dollars, these are actually some of the lowest in the developed world. But Taiwan is also a rather affordable place to live, with good health insurance, so you can do pretty well on these incomes if you live here and don’t travel a lot. Salaries at private universities are not as closely regulated as at national ones so there is much more variation.

A bigger concern is retirement. It is hard to save money on these salaries, and the current pensions given to foreigners are not as good as those for Taiwanese. Basically you get a lump sum payment of what you put into the system, rather than a monthly payment that is a percentage of your salary at retirement. There are a number of reforms being discussed right now that might improve the situation, but it is hard to know whether these will actually become law. Note that, like salaries, the pension situation is very different at private universities, with many getting much lower pensions than what is offered to public university professors.

How is the work environment? My biggest complaint about teaching here are the long semesters and large number of teaching hours. I currently have eighteen week semesters with nine lecture hours per week (three courses, each three hours a week). Added up this can be as much as five times what is required of some academics in Europe and North America. While the requirements for tenure and promotion are a little less stringent than in those places, they still require a significant commitment to research and publication on top of that heavy teaching load. And if you aren’t used to teaching in Chinese, expect this burden to be even harder your first few years. There are some efforts to switch to fifteen week semesters, and some of the better universities only expect professors to teach two courses a semester. As with salaries and pensions, the situation is much more variable at private universities.

What is your story? My journey to Taiwan, and my teaching situation here is rather unique. I wrote something about it back in 2010.