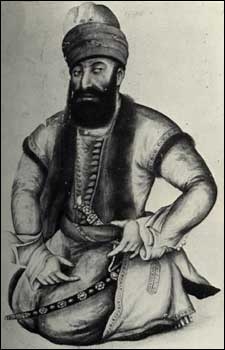 To the right is Karim Khan Zand, the guy I was named after — in honor of being born on a holiday trip to Tehran. My parents chose the Turkish spelling because Atatürk’s reforms had already provided a Latin spelling for the name. Little did they know at the time that this would result in my getting huge amounts of Turkish language SPAM!

What is really funny is that it resulted in a Jewish kid from New York being the number one Google hit for a Turkish name! I’m glad they didn’t spell it “Kareem,” since its as hard to compete with a six time NBA MVP. Or “Karim” who is an industrial designer.

Thanks to Languagehat for pointing it out! We live for the little things in life.

UPDATE: It is worth pointing out that Kareem Abdul Jabbar was born Ferdinand Lewis Alcindor, Jr. and changed his name when he converted to Islam. This is a common name among converts because it is one of the 99 names of Allah. But I was not given the name for religious reasons. This has led to no end of people assuming I am a convert (see Leila’s comment below). I don’t mind, but it has been awkward occasionally — when it has been silently assumed.

I should also add that many Ismailis are named after their leader, Karim Aga Khan, the 49th Imam of their religion.

UPDATE: Some pictures of the town of Karimabad in North East Pakistan. (More here, and here.) I was there as a tourist in 1990 and it is the most beautiful place I had ever been, but it seemed that everyone there was named Karim (they are mostly Ismailis and receive a lot of development funding from the Aga Khan Foundation). I kept thinking everyone was calling my name.

UPDATE: Shashwati is #1 too!