I wrote a post back in March about how Taiwanese politics was all about food. Well, today the BBC reports that the ministry of defense is responding to attacks that money spent on new weapons systems could be better spent on social services and education by declaring that it isn’t spending any more money that Taiwanese spend on … bubble tea [珍珠奶茶 — literally “pearl milk tea”]. I haven’t done the math, but I imagine it is correct (even if the logic isn’t).

In a leaflet campaign, the ministry says that Taiwan could save enough money to buy the arms if everyone drank one less cup of Taiwan’s popular pearl or bubble tea over the next 15 years.

The tea, which features chewy tapioca balls sucked up through a straw, was invented in Taiwan and has recently become a popular drink overseas.

A brief history of Bubble Tea can be found here.

UPDATE: What wasn’t clear from the BBC article was that the protesters brought Bubble Tea with them to the protest. Of course they did! (Thanks to JJ.) Here are pictures: 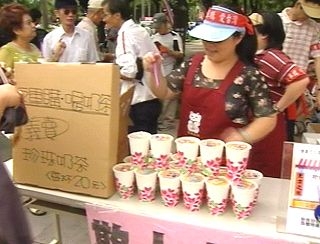 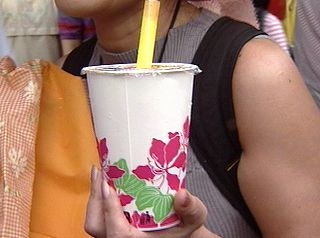